The month of May was a stressful month for me. I was faced with a claim which supposed to work out perfectly fine but the insurer decided not to pay my client.

My client went for a day surgery that cost about $9,ooo and I proceed to claim this surgery bill together with the Pre- & Post- hospitalization bills for follow-up treatments amounting close to another $8,000. This is not the first time I do a claim and everything was in order so I did not expect any hiccups.

For the benefit of those who are unsure of how a private shield plan works, it is usually make up of two plans. The first is the main plan which is usually paid by our CPF Medisave. A rider which is payable by cash is usually add on to cover for the deductible that ranges from $1,000-$3,000 depending on ward type and the co-insurance portion which is 10% of the bill. In this case, the insurer paid the amount of $6,100* after taking into account of the deductible of $2,000 plus $900 of co-insurance.

The first mistake this particular insurance company made was to make the cheque payable to the clinic instead of my client although she had fully paid cost of treatment. This issue was easily solved with the clinic to re-issue the cheque in my client’s name. And after sometime, the balance of $2000 plus $900 was made to my client. Both my client and myself felt the insurer took rather long to process with the balance of the $8,000 for follow-up treatment. I decided to call the customer service to check on the claim status and the customer service officer did a fantastic job to confirm my name and agent code to make sure that I am the servicing agent before proceed on. However, when I requested for the claim status, she replied that she cannot reveal the information to me.  I asked her,” You verified my name, agent code and you cannot release the claim status to me even though I am the servicing agent!??” (This is one ridiculous CS….) She said,” Yes. We can only reveal it to the policy holder.” So after communicating that to my client who is an UK Citizen and back to her hometown for holiday, I called the same CS again & told her,” My client is in UK now & this is her contact number, she wants YOU to call her in UK to release the info to her.”

Now! The shocking part comes in… I realized from the insurer they will not be paying a cent of that $8,000 for the Pre- & Post- consultation. I was told by them that it is because they consider Day surgery as an ‘out-patient’ and the patient has to be in confinement for “Pre- & Post-” to be paid and I wrote an email to the insurer.

The insurer clarified that they had not consider Day Surgery as Out-patient but my client had not confined for a minimum of 6 hours for this benefit to be paid and I immediately keep my client informed. 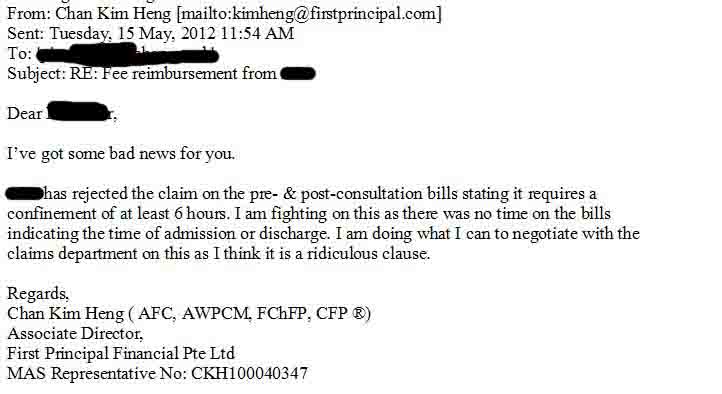 After a stressful week of waiting, I’m glad that the negotiation with the insurer turn out to be good.

The reason for posting this claim experience in my blog is not to share that some insurer are better than others or some clauses are worse than others. I am posting to clear two common myths of Financial advisers especially IFAs.

1) We do not close a deal and does not bother about the case anymore. In fact, I always tell my advisers that our job really starts only when you sign on the dotted line. If we see a case that has a good reason to appeal…WE WILL.

2) Many had thought that the claim made by tied agents will be easier than IFAs. This is totally wrong! The same policy contract is issue to the different channels of distribution so getting it from a tied agent does not mean your policy contract is more simplified. Just like the tied agents, we also have good account managers who help us in application, claims and other issues.

We are ,in fact in a better position to negotiate with the insurer if some issues arise because we worked with many insurers and know what would be the usual practice.

Finally, let me thank the account managers (they know who they are) once again for resolving this matter so promptly.