But I received one email that caused my Friday to be a lousy one. I had received an email informing of one of my client’s intention to transfer his policy out to another agent. The client was one of my long time buddies whom I known for almost two decades. My day was lousy not because of his intention to transfer out as he had told me the reason before hand and I had no issue with it. It was the contents in the transfer letter that upset me. I never believe any of my client ,especially him, will write a letter as below and I feel there’s an immediate need to clarify with him. The name & other info of my client were removed due to client’s confidentiality. 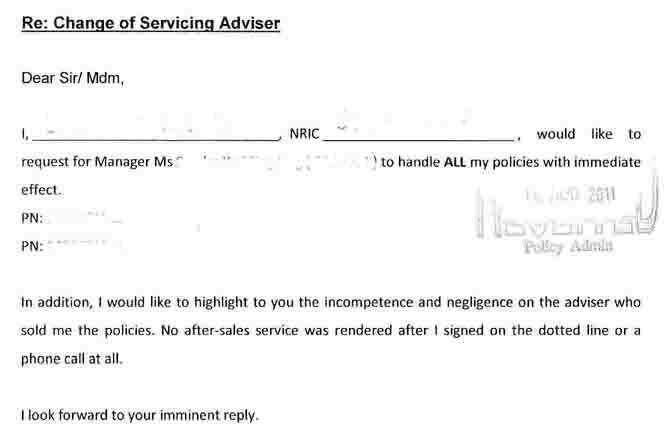 The agent had accused me of being incompetent, non-contactable or does not provide any after-sales service. These are baseless allegations but I can still accept. However, I find it totally unacceptable when I was alleged of negligence which I think is a very serious allegation in our industry. None of the allegations are true as I had been providing financial advice to my friend for more than a decade from the day I started my business. How can I be non-contactable when he is also in my facebook list and we met for social gatherings among our friends?

My friend was also upset with this letter and demanded an explanation. That agent gave me a call to apologise and I appreciate that action. She explained that it was a general template and not directing me in particular so I’m not sure how many advisors had been wrongly accused of incompetent and negligible as well. I think is totally unprofessional when I talk bad about other financial advisors . We will not see a doctor telling us that another doctor is incompetent openly, do we? Even as a non-professional, we do not go around accusing a certain foodstall is serving unhygienic food, do we? Unless you have proof or you prepared to face a legal action from them.

There is no need to state the reason for taking over. I had seen cases where the agent really goes ‘Missing In Action’ after the purchase but I will not mention it in the letter for transfer even in such cases. These are just some basic respect for fellow practitioners! It is also because of this basic respect that I removed the name of this particular advisor as well.

What make matter worse is that she simply gets the client to sign off this letter without explaining what is the content. In most cases, the client signs “base on trust” and I think the trust is being abused here. Most of the legal feeback is there is a case of deflamation and if any financial advisor decides to sue for deflamation, the one that gets the legal suit will be the client! This is 100% irresponsible!!! Our role is to put the client’s interest first and there is defintely no need to put any client in such a position of facing a legal suit. In any case, a general template that I have been using to request for a policy transfer look like this...

It will be short and sweet. It will only state the purpose of the letter and it will neither accuse other agents of any wrong doings nor unprofessional practice even if there is any. If there was suspected of any illegal or unethical practice suspected then we should instead bring that issue to the relevant authorities.

Nevertheless, this letter that I received will served as a timely reminder that client servicing is of top priority. There’s a silver lining behind every cloud and this silver lining will be the strengthen bond between us – my buddy, my client & me. I am also glad that 10/10 person I spoke to, may he/she be a financial practictioner or not (and most important my client) thinks that it is not appropriate and totally unacceptable for such action. It pleased me to know that majority in the industry are still ‘white sheeps’.